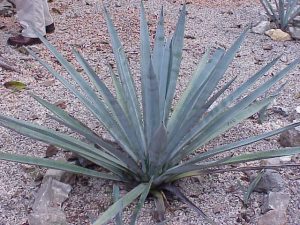 Tequila manufacture starts with the blue agave plant. After planting, agave is watched for ripening, an astonishing 8 to 12 years. The plant leaves are then cut, and the core, called a piña, is pulled from the ground. The piña, aptly named because of its resemblance to a pineapple, usually weighs 40 to 70 pounds. It takes an average of 15 pounds of the core to make one quart of tequila.

The piñas are next taken to a distillery to be sectioned or chopped for roasting; the sweet core starches convert to sugar in a furnace. For today’s factories, the furnace has been replaced by steam ovens, which is not only faster, but uses less energy.

After cooking, the piñas are torn apart so the fluid can be extracted. The liquid is moved into large container to begin fermenting. For those distilleries following a traditional process, the piñas are taken to a grinding mill and mashed by a stone wheel. The fluid and the remaining core pieces are placed in a wooden container. In both processes, yeast is then put into the containers. The type of yeast is different from distillery to distillery, allowing a unique fermenting to create the alcohol. The core liquids ferment up to 48 hours, before being distilled. Alcohol is produced in the first distillation, and the second distillation produces the base for tequila. Each distillery creates a unique type of tequila with its special ingredients before packaging.

Tequila production and distribution is strictly controlled by the Tequila Regulatory Council (Consejo Regulador del Tequila), or CRT, a private, non-profit organization. Their main objectives are to assure compliance, guarantee authenticity, and to certify compliance. CRT encompasses the entire Tequila production from beginning to end, including agave farmers, industrialists, bottlers, labelers, marketers and government representatives, etc., that ensures quality, and creates reliability and confidence in the product.
(http://www.itequila.org/made.htm)